Runners speak: what inspires a four-time KTM runner to come back to the trail?

The Kaveri Trail Marathon is India’s oldest trail run and a scenic one too! Being in its 12th year this year, this trail run has hosted over 10,000 runners. It isn’t very often though, that we read about a runner’s inspiration and dedication to running KTM unless of course, we meet them in person. We caught up with Dharmendra – who is one of the most prominent faces of Runners for Life. He is a running coach by profession and has run the full marathon at KTM more than twice! Here is his story…

How and when did you begin your running journey?
I began running at IIM Lucknow in August 2001, in part due to the campus being beautiful and green, especially in winter. I began running to warm up so that I would not get injured playing football. I have never stopped loving running since.

How did you start running at the Kaveri Trail Marathon?
I began running on the roads and running on trails was incidental, given that I am a city-dweller and there aren’t that many trails to run around. Once I began to get better at running, I realised that while I was a bit slower on trails, I recovered much faster from even long runs on trails, than on roads. Further, trails rarely fail to surprise you with something or the other, even if you have run on the same route before. Kaveri Trail Marathon was not only my first trail marathon but also one of my earliest marathons as I ran at the first, 12 years ago!

What excites you about KTM?
With a reasonably flat trail, lush green fields to one side, flowing water to the other side and such a quiet place to run – what’s not to love? And how many events do you get to dip in the water post-run?! I love running by myself and especially on trails. Given the opportunity for pause and reflection that KTM presents, I am always eager to go and run at the event.

Why do you keep coming back to run at KTM?
It is one of the few organized trail runs that has run for a decade. There are so many runners who have run at the first edition and still come back, sometimes with new friends and family. It is more of an annual get together than a run for me.

KTM is a significant part of my life, since I am a resident of Karnataka and the K in the KTM is the lifeblood of a big part of the state. Running is a big part of my life and my runs at KTM have always been memorable not just as a runner but also as a coach as some of my trainees have loved the challenge of KTM.

Anyone who has not run KTM should run it at least once. People who have the opportunity to go back should keep doing so!

Inspired enough to run? Be a part of an experience you will not forget.

Bring your friends along and run the Kaveri Trail Marathon happening on 24th & 25th November 2018. You also have a choice of running the newly introduced 5k category – don’t miss this! Click here to register.

Employee wellbeing in the new normal 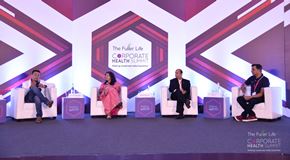